By Andrew Campbell February 26, 2021 No Comments We spend a fair bit of our time on the phone talking with investors each week; getting introduced to potential new investors and catching up with current investors. I always enjoy these conversations as it’s a great way to learn about people’s investing interests and understand their goals. It also allows us to talk about our business and the markets we’re in (Austin and San Antonio) and compare those with others in the country.

It seems as if everyone has heard all about the growth we’ve experienced and seen the big headlines from Tesla, Oracle, Samsung and the like. Those announcements are driving a lot of interest and excitement about investing in Austin.  But also some concerns.

On one of our investor calls recently, someone asked me “Did I miss the wave?  Is it too late to invest in Austin?”

My answer: we certainly don’t think so.

Make no mistake–the headlines and growth of the Central Texas corridor have attracted a lot of attention from capital; institutional investors and family office buyers show up everyday looking to understand the market and cap rates have compressed by 75-100bps over the last year–during the pandemic and slower economy.

While lower cap rates make finding the really good deals a little more challenging, we think it’s also a validation point for the market and a sign that investors believe in the long-term prospects for our city.

We believe multifamily is pretty simple–its predicated on population growth and job creation, and monitoring the supply in the market.  On those fronts, the “wave” is not even close to cresting.  Look at these charts from Freddie Mac highlighting population growth: 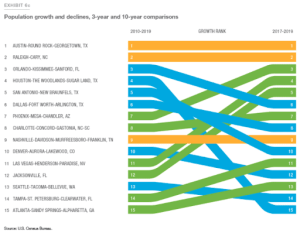 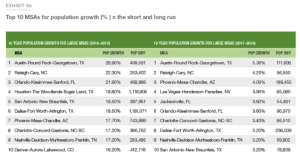 Over the last 10 year period and 3 year period Austin has been the fastest growing large city; San Antonio is 5th over the last decade. You want to invest where the population is growing–and we’re showing now signs of slowing down.  Today on the residential side of things, Austin has 0.6 months of housing inventory. A balanced housing market has about 6 months of supply.  They literally can’t build it fast enough–and again this is in the middle of a pandemic that has slowed down the national economy.

But why are people continuing to move here?  Jobs.  We track the Chamber of Commerce activity closely and Cooper continues to volunteer time there.

In 2020, Austin set a record for the number of job announcements that were made.  In a year filled with terrible economic news and pandemic filled headlines, Austin saw 45 companies relocate to Austin and 109 announce expansions.  All told, there were 21,864 jobs announced–a record going back to 2004.

In 2021, we’re off to another fast start and many in the space think 2021 will become the best year of economic expansion in Austin’s history–toppling the record set just a year ago. Last year the regional-Austin MSA chamber of commerce had over 700 live prospects, and currently have nearly 200 prospects seriously considering a move to Austin. With the January announcement that we’re the leading contender to land a $17 Billion plant from Samsung, things are off to a good start.

All told, the market continues to grow.  The population is increasing and companies continue to move and expand here.  People follow jobs.  But companies are attracted to the talent pool in place.  It’s a bit of a snowball effect, as they attract each other and the momentum grows on each side over time. It is one of the big reasons we continue to be so bullish on the market–it’s where everyone wants to be.

It’s not just population growth though.  We are continuing to see rent growth projections for the city over the next several years.  While 2020 was a flat year for rent growth, Yardi Matrix is projecting Austin to see 3.9% rent growth this year–third highest in the country.  In a recent conversation with a broker, we were talking about a deal that had just sold.  The buyer was a family office from Boston and they paid a big number for a deal we were tracking.  His comment was that this family felt like “Austin was the only place you can project 5% rent growth” and they were making the bet that it will happen.

When you refer back to the current housing inventory (or lack thereof) you can see their line of thinking.  If people can’t buy houses, they’re forced to be renters.  Meanwhile, the housing costs are skyrocketing pricing many people from homeownership.  While affordability is a challenge (and an article for another day) that does bolster the apartment market.

The other factor that will drive rent growth?  Lack of supply.  One of the main impacts from the economic slowdown we’re projecting is a lack of supply in 2022 and 2023.  Many of the projects that were slated to start construction last year were delayed as banks froze up and builders had to pause their plans.  It didn’t stop people from moving here, and we’ll see that impact over the next 12-24 months as the “normal” new construction pipeline looks a lot thinner than it otherwise would have.  We saw an article recently that suggested Austin could see rent growth as high as 9% in 2022-2023 because of this.  While we’re certainly not projecting that level of rent growth, we do think we’ll continue to see steady and consistent growth.

All of that is a really long winded answer to a simple question.  No, we don’t think you’ve missed the wave in Austin.  In fact the wave is still growing and not close to cresting.  We remain an incredible market poised for future growth and success. We love reminiscing about the good ole days growing up in a small college town, but we’re excited about the continued growth and transition of our city into a metroplex.  Along the way, we hope to partner with you on a few deals as we all ride the wave. The Pros and Cons of In-House Property Management